What is the UNFCCC?

The United Nations Framework Convention on Climate Change (UNFCC) is an international environment treaty, negotiated at the United Nations Conference on Environment and Development (UNCED), informally known as the Earth Summit, held in Rio de Janeiro from 3 to 14 June 1992.

The UNFCCC was negotiated as an international response to Climate Change and is currently the only international climate policy venue with broad legitimacy, due in part to its virtually universal membership.

Its objective is to “stabilize greenhouse gas concentrations "at a level that would prevent dangerous anthropogenic (human induced) interference with the climate system." It states that "such a level should be achieved within a time-frame sufficient to allow ecosystems to adapt naturally to climate change, to ensure that food production is not threatened, and to enable economic development to proceed in a sustainable manner.“

In 1995, countries realized that emission reductions provisions in the Convention were inadequate. They launched negotiations to strengthen the global response to climate change, and, two years later, adopted the Kyoto Protocol. The Kyoto Protocol (KP) legally binds developed countries to emission reduction targets. The Protocol’s first commitment period started in 2008 and ended in 2012. The second commitment period began on 1 January 2013 and will end in 2020.

Relevance of UNFCCC to REDD+

The REDD initiative, later renamed to REDD+ stands for Reducing Emissions from Deforestation and Forest Degradation and includes the role of conservation, sustainable management of forests and enhancement of forest carbon stocks in developing countries (+). It is an effort to create a financial value for the carbon stored in forests, offering incentives for developing countries to reduce emissions from forested lands and invest in low-carbon paths to sustainable development (UN-REDD Programme).

It was first proposed as a climate change mitigation mechanism to the Conference of the Parties (COP) to the UNFCCC in 2005 and is tied to the Kyoto Protocol through efforts to reduce carbon emissions from developing countries in which the initiative is being carried by seeking lower carbon paths to sustainable development and the trading of certified carbon credits (emissions reductions) to Annex I Parties to the Kyoto Protocol. 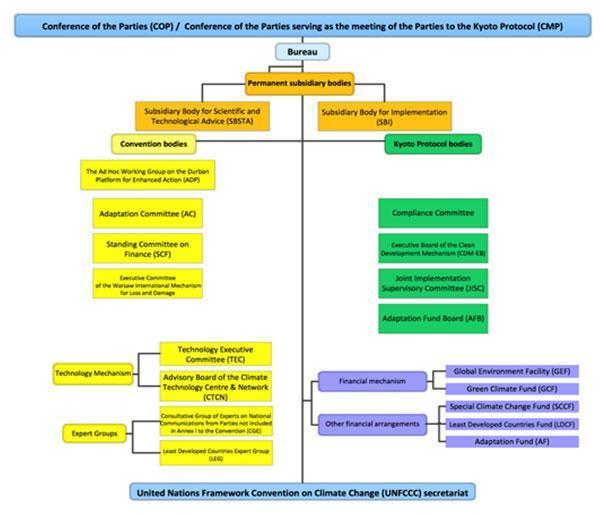 Conference of the Parties (COP)

The SBSTA supports the work of the COP and the CMP through the provision of timely information and advice on scientific and technological matters as they relate to the Convention or its Kyoto Protocol.

The SBI supports the work of the COP and the CMP through the assessment and review of the effective implementation of the Convention and its Kyoto Protocol.

The Ad Hoc Working Group on the Durban Platform for Enhanced Action (ADP) is a subsidiary body that was established by decision 1/CP.17 in December 2011. The mandate of the ADP is to develop a protocol, another legal instrument or an agreed outcome with legal force under the Convention applicable to all Parties, which is to be completed no later than 2015 in order for it to be adopted at the twenty-first session of the Conference of the Parties (COP) and for it to come into effect and be implemented from 2020. By the same decision, the COP launched a workplan on enhancing mitigation ambition to identify and to explore options for a range of actions that can close the ambition gap with a view to ensuring the highest possible mitigation efforts by all Parties.

Bureau of the COP and the CMP

The Bureau supports the COP and the CMP through the provision of advice and guidance regarding the ongoing work under the Convention and its Kyoto Protocol, the organization of their sessions and the operation of the secretariat, especially at times when the COP and the CMP are not in session. The Bureau is elected from representatives of Parties nominated by each of the five United Nations regional groups and small island developing States.

CDM EB - Executive Board of the Clean Development Mechanism (CDM)

The JISC, under the authority and guidance of the CMP, supervises the verification procedure for submitted projects to confirm that the ensuing reductions of emissions by sources or enhancements of anthropogenic removals by sinks meet the relevant requirements of Article 6 of the Kyoto Protocol and the joint implementation guidelines.

The Technology Executive Committee, together with the Climate Technology Centre and Network, consistent with their respective functions, is mandated to facilitate the effective implementation of the Technology Mechanism, under the guidance of the COP. The TEC was established by the COP at its sixteenth session in decision 1/CP.16.

Advisory Board of the Climate Technology Centre and Network (CTCN)

The Climate Technology Centre and Network (CTCN) is accountable to, and under the guidance of, the COP through an advisory board. The Advisory Board of the CTCN was established at COP 18 and gives guidance to the CTCN on how to prioritize requests from developing countries and, in general, it monitors, assesses and evaluates the performance of the CTCN.

The Adaptation Committee was established by the COP at its sixteenth session as part of the Cancun Agreements (decision 1/CP.16) to promote the implementation of enhanced action on adaptation in a coherent manner under the Convention, inter alia, through various functions. Its work was launched at COP 17.

Executive Committee of the Warsaw International Mechanism for Loss and Damage

The Executive Committee of the Warsaw international mechanism was established by decision 2/CP.19 to guide the implementation of the functions of the Warsaw international mechanism for loss and damage. The Executive Committee functions under the guidance of, and is accountable to, the Conference of the Parties.

The mandate of the Standing Committee on Finance is to assist the COP in exercising its functions with respect to the financial mechanism of the Convention in terms of the following: improving coherence and coordination in the delivery of climate change financing; rationalization of the financial mechanism; mobilization of financial resources; and measurement, reporting and verification of support provided to developing country Parties. It was established by the COP at its sixteenth session by decision 1/CP.16. Its roles and functions were further defined and its composition and working modalities elaborated on at COP 17.

The AFB supervises and manages the Adaptation Fund and is fully accountable to the CMP. The Adaptation Fund was established to finance concrete adaptation projects and programmes in developing country Parties that are particularly vulnerable to the adverse effects of climate change. The Adaptation Fund is financed by a 2 per cent share of the proceeds from certified emission reductions issued by the Executive Board of the Clean Development Mechanism and from other sources of funding.

The COP established the LEG, the membership of which is to be nominated by Parties, with the objective of supporting the preparation and implementation strategies of national adaptation programmes of action.

The COP established the CGE with the objective of improving the process of the preparation of national communications from Parties not included in Annex I to the Convention.

The GEF is an operational entity of the financial mechanism of the Convention that provides financial support to the activities and projects of developing country Parties. The COP regularly provides guidance to the GEF.

The GCF is an operating entity of the financial mechanism of the Convention and is accountable to and functions under the guidance of the COP. It is governed by a Board comprising 24 members (with equal numbers from developed and developing country Parties) and is intended to be the main fund for global climate change finance in the context of mobilizing USD 100 billion by 2020. The GCF was established by the COP at its sixteenth session by decision 1/CP.16, designed throughout 2011 by a Transitional Committee and launched at COP 17 through decision 3/CP.17, including the governing instrument for the GCF.

The IPCC is a scientific body. It reviews and assesses, at regular intervals, the most recent scientific, technical and socioeconomic information produced worldwide, relevant to the understanding of climate change. It does not conduct any research nor does it monitor climate-related data or parameters. The COP receives the outputs of the IPCC and uses IPCC data and information as a baseline on the state of knowledge on climate change in making science based decisions.&nbsp; For example, the Fifth Assessment Report of IPCC, which is due in 2014, will provide input into the COP review of the long term temperature goal and the work of the Ad hoc Working Group on the Durban Platform for Enhanced Action.

The Special Climate Change Fund (SCCF) was established to finance activities, programmes and measures relating to climate change, that are complementary to those supported by other funding mechanism for the implementation of the Convention. The Global Environment Facility (GEF) has been entrusted to operate the SCCF.

Key UNFCCC Decisions on REDD+ and the IGECIDDM Project