Related Past and Current REDD+ Projects

A National Capacity Self-Assessment (NCSA) was completed in 2008 and it identifies key cross cutting constraints impeding SI from complying with its own environment laws and Multi lateral environment agreements (including the 3 Rio Conventions-UNCDD, UNCBD, UNFCCC). These includes:

In addition, these were also noted to be exacerbated by other embedding factors such as scattered geography, fast growing population and the traditional land tenure system, which continues to underpin resource and environmental management in Solomon Islands.

The other key outcome of the NCSA was the National Environment Capacity Development Action Plan (NECDAP) (2008-2010). The NECDAP comprise of recommended actions to address the gaps.  The NECDAP (tool for implementation, monitoring and evaluation) consisted of 115 actions, 32 outputs and 13 outcomes spreading over the following broad five goals:

This was a project funded by UNDP and UNREDD to develop a national REDD+ Strategy for the country.  The key Outcome of the UNREDD program is the development of Solomon Islands National REDD+ Roadmap Strategy. This strategy is being recently endorsed in 2015 through the support of the IGECIDDM Project.

The IGECIDDM, which stands for Integrating Global Environment Commitments in Investment and Development Decision Making, is a national project three year project (2015-2017) launched in June 2015 implemented by UNDP in collaboration with MoFR, MAL and MECDM,which is responsible for implementing the REDD+ Readiness (phase of preparation prior to the full implementation of REDD+ activities) Roadmap 2014-2020. This project is funded by GEF, UNDP and with in kind support from the Government.

HOLISTIC BACKGROUND OF THE PROJECT

Climate change, green house gas emission by industrialized nations, deforestation, pollution, logging, and mining are some of the global environmental concerns of small island nations including Solomon Islands due to their impacts-some of which include sea level rise, desertification, threatened food security and loss of valuable fauna and flora species. All these comes about as both the industrialized and developing/third world countries quest for economic and social development.

Solomon Islands Government (SIG) has collaborated both at the international and domestic level to address these issues. At the International Front SIG ratified important Multi-lateral Environmental Agreements (MEAs) such as the United Nations Framework Convention on Climate Change (UNFCCC-ratified in 1994), the UN Convention on Biological Diversity (UNCBD- ratified in 1995), and the UN Convention to Combat Desertification and Drought (UNCCD- acceded to in 1999.

At the domestic front, SIG has also enacted important environmental laws and national policies that directly/indirectly address the underlying drivers whilst enhancing sustainable development in the country. The key laws are the Environment Act, the Forest & Timber Utilization Act, the Protected Areas Act and so forth.

SIG also  involved in co funding programs which targeted specific environmental issues seen to be an important policy issue to the citizens. The IGECIDDM is one example of such programs.

The IGECIDDM project/ program objective: is “To strengthen and institute a tiered network of key decision-makers, planners, and other stakeholders to catalyze and sustain reductions of deforestation and forest degradation in a way that meets objectives under the three Rio Conventions whilst enabling  the realization of the associated environmental benefits to the country”

The following diagram shows the logic model of the IGECIDDM project. It summarizes the inputs, outputs, intended outcomes and the expected long-term impacts of the project. 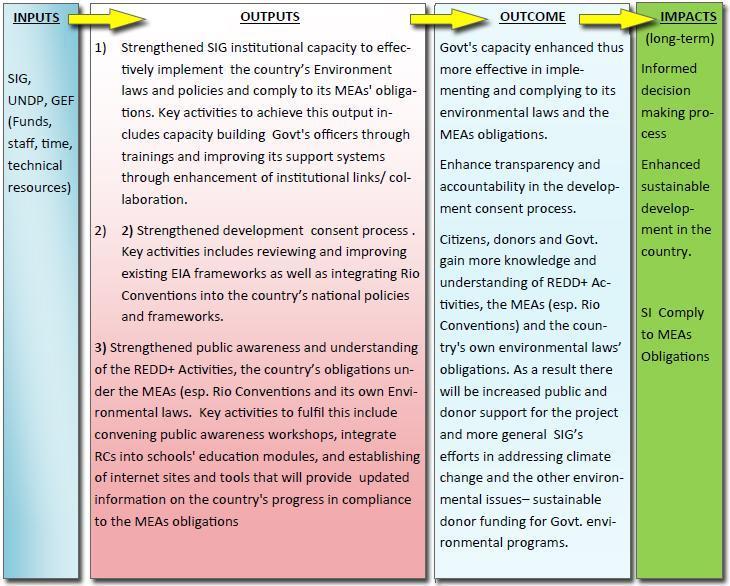